How to celebrate Pride and boost LGBTQ+ inclusion in the workplace 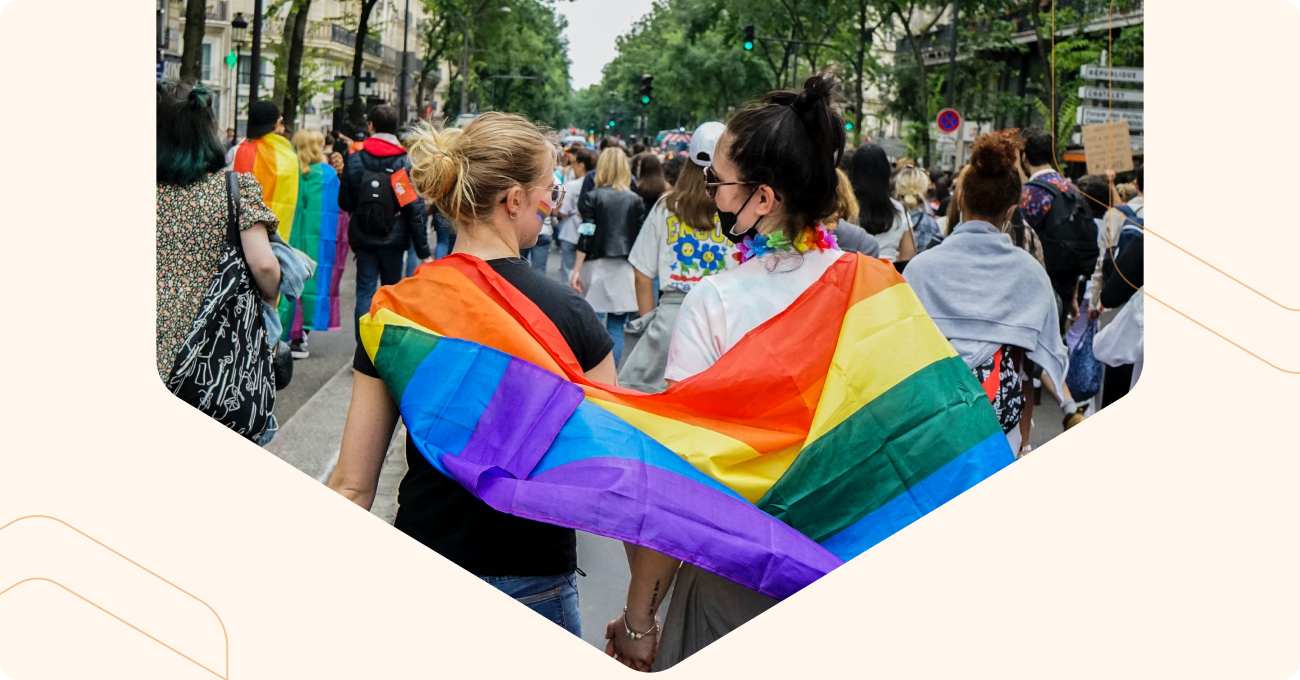 June is Pride Month – a time to come together and celebrate love in all its forms, loud and proud. People all around the world gather to recognise the importance of equality, openness and acceptance of diverse sexualities and gender identities. It’s a meaningful month for many of us, and it’s important to show you care at work too. Here are 6 actions to celebrate Pride in the workplace and boost LGBTQ+ inclusion year-round.

What is Pride Month?

Pride month is a time to celebrate love in all of its beautiful, diverse forms. All around the world, people host celebrations, parades and events centred around the LGBTQ+ (Lesbian, Gay, Bisexual, Trans, Queer and more) community. It’s a time to recognise the importance of loving whoever you love and living the life you want to live.

Pride began in New York after the Stonewall Uprising of June 1969. Police brutally clashed with LGBTQ+ people after raiding a gay bar. People then gathered to protest the discriminatory treatment and laws against the LGBTQ+ community. The protests were led by two trans women of colour, Marsha P. Johnson and Sylvia Rivera. 1 year after the uprising, on June 28 1970, thousands of people marched in New York in the name of LGBTQ+ pride and liberation.

Today, Pride celebrations recognise the incredible progress in LGBTQ+ rights, but it’s also a time to reflect on the inequalities the community still face and how we can overcome them.

This is an important month for many people, and it’s important to also recognise this month at work. Here are some ideas on how to celebrate Pride in your company and how to embed inclusive, everyday behaviours to boost belonging for LGBTQ+ employees all year round.

Diversity isn’t just what you immediately see when looking at someone. We can’t assume someone’s sexuality and gender identity, but they do impact people’s experiences at work.

LGBTQ+ people often have to navigate the sometimes clashing needs of feeling accepted and living authentically, at work and beyond.

A 2017 Stonewall survey of over 5,000 LGBTQ+ people revealed that over a third (35%) have hidden their sexuality or gender identity at work due to fear of discrimination. This can lead to feelings of isolation, especially when LGBTQ+ people are underrepresented at work.

When you don’t see yourself represented at work, people may feel like they don’t belong. Subtle signals might send messages about what the ‘norm’ is around your office. Things like the way people talk about relationships, the assumptions people make about others’ partners, and the language used in internal communication. If you assume that heterosexuality is the standard, then people who don’t fit that label may feel excluded.

Fair HQ enables employers to measure the employee inclusion experience across different groups in their company. As a general trend, we see that LGBTQ+ employees score lower than their heterosexual peers. The scores differ across companies (and some do better than others), but inclusion gaps show that gender identity and sexuality influence peoples’ work experiences in unexpected ways.

The Fair HQ Platform shows a gap in inclusion scores between LGBTQ+ and Heterosexual employees (note: not real company data).

So how can you set the norm for more openness? How can you shift your default thinking and avoid making people feel excluded? Here are 6 solid actions you can take to build an open culture that celebrates differences.

The language people use in day-to-day communication is a strong indicator of your company culture. And culture is always set from the top. Leaders should take care to use inclusive language in their team-wide communication and internal company policies. Here are some tips:

Sometimes people are afraid to talk about certain subjects because they’re afraid of saying the wrong thing. You can open up the conversation by building a glossary of terms relevant to the LGBTQ+ community (and beyond!) so that everyone is on the same page.

💡 Tip: This glossary will be a helpful document to refer people to if you notice anyone using outdated or offensive language. It’s a simple nudge to change behaviours.

Here’s an example LGBTQ+ glossary we use at Fair HQ:

3) Celebrate a variety of life events

Learning about our colleagues on a personal level helps us to feel more connected and included. Everyone on your team should feel able to share the meaningful moments in their lives with others at work.

Do you throw a party when a colleague gets married or has a baby? Do the same when someone enters a civil partnership, adopts a child, or celebrates other meaningful events. 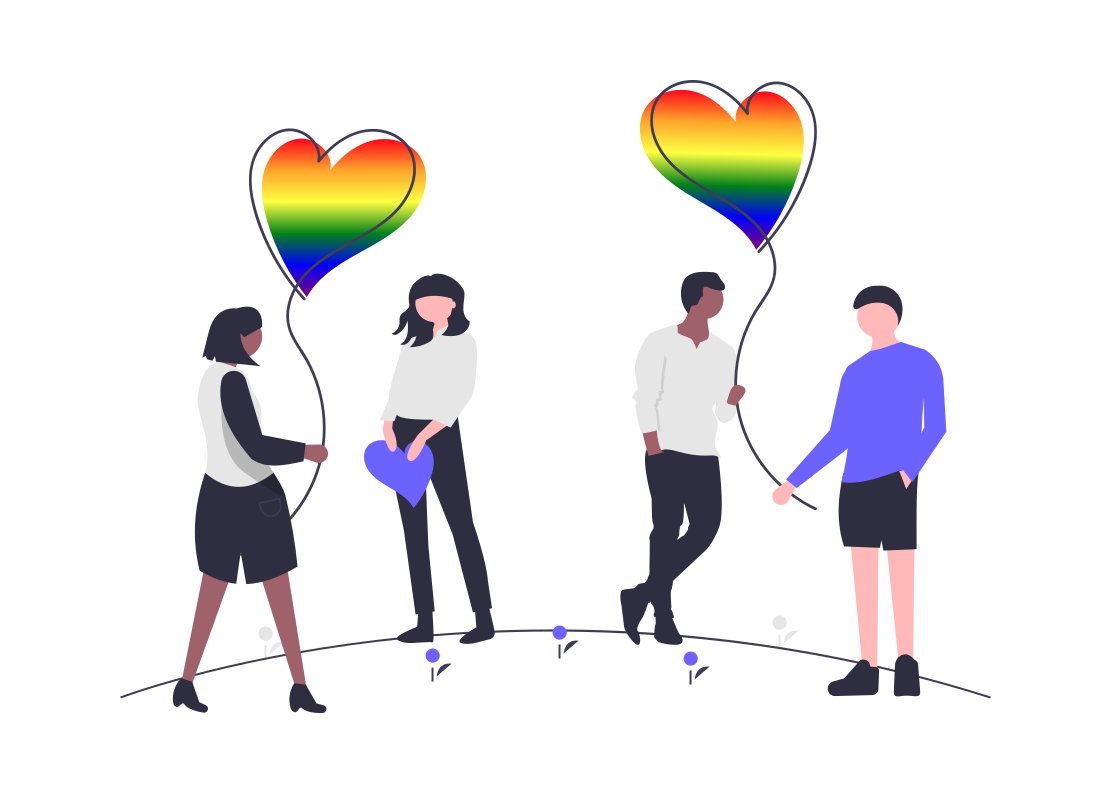 4) Set your pronouns in your external and internal communication platforms

Set the norm for all employees to include their pronouns in their internal and external online communication. Research suggests that this small act can go a long way to signalling a supportive and fair environment for trans, non-binary or gender-nonconforming colleagues.

Those at the top should take the lead. When employees see this behaviour from leaders, they’ll be reassured that you have an open approach to sharing or changing pronouns.

Here’s a message you can share with the team:

Hi team! I’d like to share a really simple action we can all do to set a gender-inclusive tone at [company name].

Did you know you can easily add your pronouns to Slack, Zoom and your email signature?

5) Call out stereotypes or discrimination

Unfortunately, LGBTQ+ people still face discrimination and harmful behaviour, in and outside of work. A Stonewall survey revealed that almost one in five LGBT staff has experienced negative comments or conduct from work colleagues in the last year because they are LGBT.

Allies play an important role in standing up against harmful behaviour. It’s not enough just to say you don’t tolerate discrimination, you have to show it with your actions.

We’ve written a guide on how to safely, confidently stand up against discrimination — read more here. And consider running an Active Bystander workshop to train people to confidently intervene in these situations.

6) Invite your team to organise LGBTQ+ celebrations and initiatives.

Pride is a significant month on the D&I calendar. Use this opportunity to host events that celebrate the LGBTQ+ community and raise awareness of relevant social issues.

The key is to ask your team what they’re interested in organising so that everyone feels connected to the event. These events should be open for everyone to take part in. Here are a few ideas:

Pride Month is a wonderful opportunity to celebrate the LGBTQ+ community, but inclusion is a year-round endeavour. Don’t limit your events to just one month out of the calendar, and make sure you pay attention to inclusion every day of the year.

If you’re keen to understand your company makeup and to start measuring the inclusion experience of groups within your business (including LGBTQ+), Fair HQ is the solution for you. Learn more here.

Perales, F., Ablaza, C., Tomaszewski, W., & Emsen-Hough, D. (2021). You, Me, and Them: Understanding Employees’ Use of Trans-Affirming Language within the Workplace. Sexuality Research and Social Policy, 1-17.